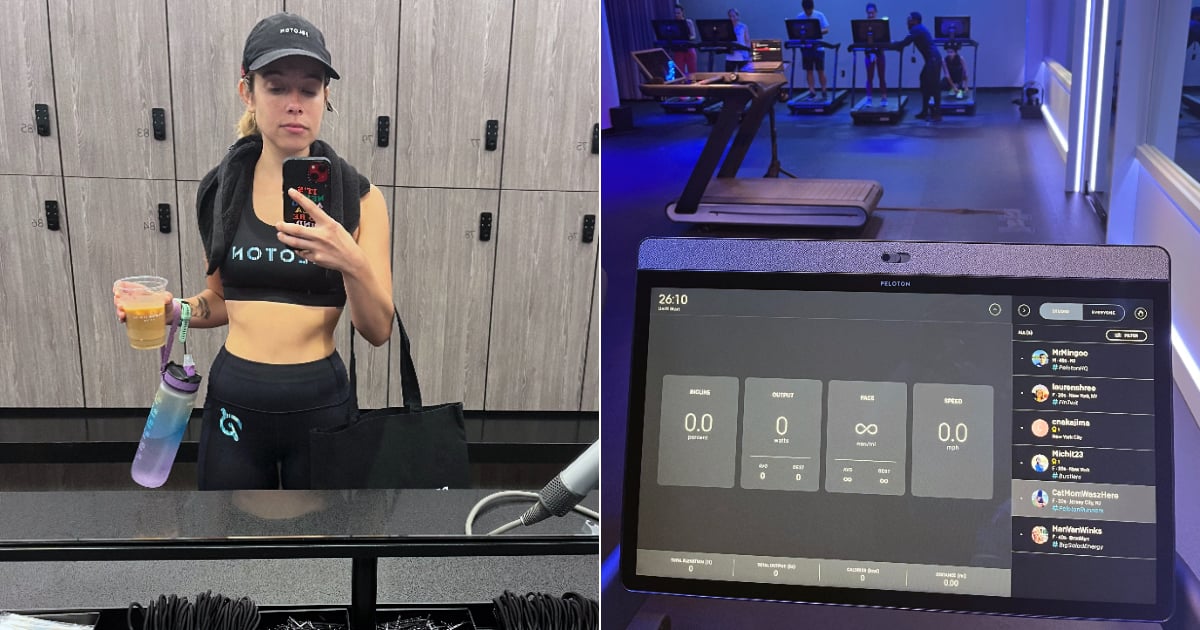 If you’ve taken a virtual Peloton class with tread, strength, and bootcamp instructor Jess Sims, then you’ve probably heard a few of her legendary quotes. My favorite? “Not every workout is going to feel like Disneyland.” But that’s exactly what walking into Peloton Studios New York feels like: magical and otherworldly.

From the bright, backlit walls to the polished wooden floors, the design is modern and the tech is most prominent, beginning with the gigantic screen flashing snippets of the world-renowned instructors before guests at entry. At the bottom of the screen, there are real-time class countdowns for each of the four studios — Cycling, Running, Strength, and Yoga — all of which are situated somewhere beyond view, booming to their own beats.

And it’s so much more than just a place to work out. Up the first flight of stairs is the familiar “P” sculpture that the instructors routinely pose in front of before or after teaching a class (as evidenced on Instagram). Down the corridor to the right are the workout studios, along with floor-to-ceiling locker space. On the third level, there’s a lounge, plus displays of all the latest Peloton products and apparel. Here, you can also catch a glimpse of the control room or spend time in the state-of-the-art locker rooms, which are equipped with bathrooms, showers, and towels, along with hair and makeup stations and floor-length mirrors. It’s the type of fitness space you want to thoroughly enjoy; one where working out definitely doesn’t feel like a chore, but more like a luxury.

About 20 minutes before a class is scheduled to start, a voice echoes over the loudspeaker, announcing that the studio doors are open, inviting athletes in to temporarily step away from the rest of their lives and focus, together, on the workout at hand. But what happens once those doors close? What’s it like to do a workout that’s recorded live for a community of seven million members to stream from their homes, and to compete against thousands of people from that community on the live leaderboard while you’re in the studio?

Ahead, we’re answering every burning question you have about what it’s like to take an in-person class at the new Peloton New York Studio.