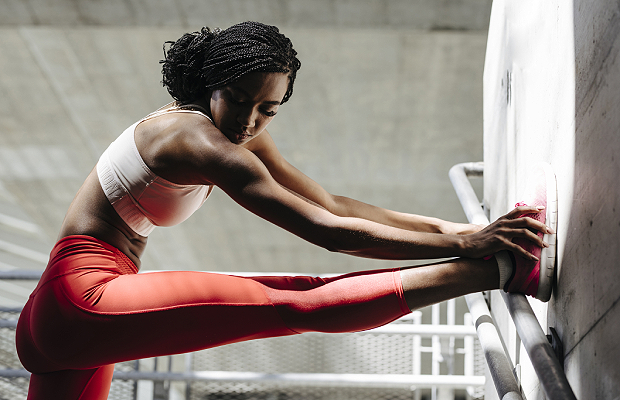 While feeling sore after a challenging (or new) workout is totally normal, it’s important to note that not all types of aches and pains are just byproducts of your bod’s natural healing process. One common place this comes into play is with an IT band injury. What is the IT band, exactly? Here’s everything you need to know.

The IT band (a.k.a. iliotibial tract band) is a thick piece of fascia, or connective tissue, that runs from the side of the hip down to the side of the knee, says Bianca Spicer, exercise physiologist and owner of Spicer Fitness and Wellness in Atlanta, Georgia. You can think of it kind of like a rubber band, as it functions inside your body in a similar way.

Whenever your leg moves forwards or backwards from under your hips, like during a stride, elastic energy is stored and then released when the movement is reversed. The IT band ultimately helps your system save energy, especially during a run, according to research from scientists at Harvard University.

Given their starring role in keeping you moving, maintaining healthy IT bands is super important. So is knowing when you’re just achy from a hardcore sprint workout and need to do some extra recovery — or when you’re actually hurt.

Signs And Symptoms Of An IT Band Injury

Because your IT band is such a workhorse, it’s got a higher rate of injury than tissue or muscles you don’t utilize so frequently. That technical term for this is IT band syndrome, and it’s the second most common running injury, according to research from the Physical Medicine and Rehabilitation Clinics of North America. Symptoms of IT band syndrome include:

Common Causes Of IT Band Syndrome

Your glute muscles, hips, and hamstrings all run along your IT bands and work in tandem with it to help stabilise your knee. Because of this, after intense lower-body workouts, runs, jump training (a.k.a. plyometrics), or even a lot of brisk walking, the IT band may become inflamed.

In general, there are three usual suspects that cause IT band injuries:

If you’re not sure whether your pain is IT band syndrome, Spicer recommends getting a formal diagnosis from a physical therapist. For mild pain, changes like better form, more rest, and rehab exercises (e.g. strengthening your hips, butt muscles, and outside of your thighs) should help.

One treatment Spicer doesn’t recommend? Foam rolling along your IT band. “You want to make sure you’re foam rolling the muscle,” she says. “The biggest mistake we see with adjusting the IT band is people mistaking the IT band for [muscle].” Since it’s tissue, it doesn’t benefit from this type of tension release. So stick to hitting your quads, hammies, glutes, and inner thighs instead.

This article was originally published on www.womenshealthmag.com